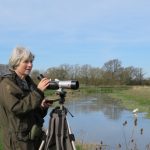 Val describes herself as the general dogsbody, but also took on the Treasurer role in 2019.

Sussex born and bred, Val spent a few years in the West Country before returning to the county in 1986, and settling in Henfield in 1992. Seriously birdwatching since the late 70s, and bird ringing since 1983, Val has been Secretary of the Sussex Ornithological Society 3 times and is still very involved with their activities. She looks after “Area 9”, the patch including Rye Farm, and the stretch of river from Stretham to New Inn Farm, which in 2014 produced a brilliant Grey Phalarope and the village’s first Glossy Ibis in 2020!