Yes, it was 1999 when Will Green and I had our first date with the Luscinia megarhynchos population of Henfield. Our first Henfield Birdwatch survey in 1999 coincided with a national survey of Nightingales by the British Trust for Ornithology, but at that stage we confined our local efforts and records to the parish boundary. However, the thrill of the hunt got the better of us, and in subsequent years the range was extended to other local areas where singing males had been heard, including Wineham and Shermanbury, and Clappers Lane to Edburton.

Depending on the weather, each year we make two or three visits by car on mild, still nights, stopping at strategic points, straining the ears to ascertain the direction and distance of the song, then poring over the OS map to try to pinpoint the bird’s location. Since 2007 records have 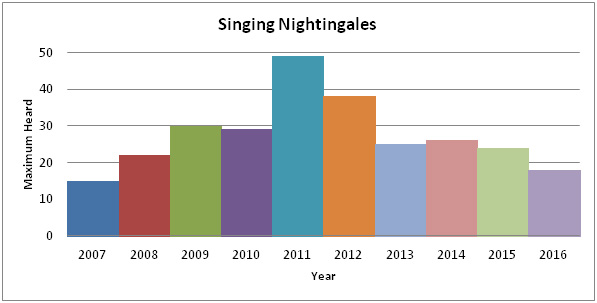 been kept on my computer, casual sightings at locations not covered by our night visits have been added to the totals, and the estimated maximum number for these years is shown in this graph.

Nightingales prefer scrub habitats with blackthorn, and often near streams. Hence intensively farmed areas and neat hedges are not to their liking, but the thick, lightly-managed hedgerows around Wineham, Shermanbury, Woods Mill and Edburton have held singing males each year. However, 1999 seemed to mark the end of the species’ tenure at Broadmere Common. We heard five that year, but there were none in 2000 and they have not returned there since, though in 2011 three were heard very nearby and one was heard again at the foot of the greensand ridge below Springhills in 2012, 2013 and 2014. The change of use of Platts Wood at Woodmancote into a deer park in 2011/2 resulted in loss of the scrub layer, and no birds have been heard there since then either.

In the astonishing year of 2011 nearly 50 singing males were found, but since then numbers have returned to normal levels of between 20 and 30 each year. Sometimes one is heard singing at a site on one occasion, but not subsequently. This could be because a bird has moved, that the bird had just arrived and had not yet found a suitable home, or that it found a mate quickly, there are no rivals and the pair are busy looking after the business of breeding.

Our outings in 2015 and 2016 produced 24 and 18 respectively – but both years were marked by cold, damp weather during the time the species would have been breeding, so we are hoping for more favourable conditions in 2017.

Of concern to us was a proposal from Mayfields to build a “new town” centred on Wineham which would result in the loss of one of our best areas of habitat. Henfield Birdwatch Nightingale records were supplied to the ecologist preparing a report on behalf of LAMBS (Locals against Mayfield Building Sprawl) who fought this proposal, and at the moment (2017) the consortium appear to have withdrawn it.

The BTO website tells us that the British breeding range has contracted by 43% in the last 40 years and numbers are thought to have reduced by more than 90% since the 1960s (Holt et al. 2012). We are lucky to have a stable population in our neighbourhood, and will continue to monitor the whereabouts of this amber-listed Bird of Conservation Concern.