The forecast for 17th June promised a scorcher so Debbie & I (Nigel) accompanied by Elaine, Roger, Hilary, Jill, Angela and Pauline set off extra early to catch the cool of the morning. Our destination the Sussex Wildlife Trust reserve of Old Lodge on Ashdown Forest. Heathland with small ponds and stands of coniferous trees provides a wonderful habitat for some quite specialised birds. Hearing is very important so I was at a distinct disadvantage but we head some great ears – notably Debbie & Angela. Just as well because, not long after starting our walk, sound alerted them to a small bird which the rest of us were then able to see. An unusually show-offy Dartford Warbler had a look at us from atop some gorse before being joined by another. The second bird was proudly carrying a very large caterpillar so we moved on in case we were too near a nest. We saw a number of these iconic heathland birds during the morning with a number being fairly recently fledged youngsters. 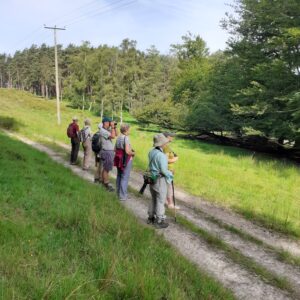 The “ears” were soon directing us to Willow Warbler, Chiffchaff and Tree Pipit while Stonechat, Robin, Chaffinch, Linnet and Goldfinch were more easy to find for us “visuals”. We homed in on a small bird flitting around a five bar gate which obligingly alighted on a post to identify itself as one of many gorgeous Common Redstarts we came across. Being a Henfield Birdwatch Group we mixed assiduous birding with lovely relaxed conversation which at one point centred on a number of folk saying they hadn’t heard a Cuckoo this year. Cue a resounding “cuckoo” and literally out of the blue we were treated to a three Cuckoo flypast. Not content with that we all heard a strange gurgling call which we eventually agreed was the female bird – a triumphal gurgle on laying an egg??

Those of us (which did not include Debbie & me!) who had remembered to brings drinks made for an inviting pile of logs and sat being refreshed to the accompaniment of a parachuting & singing Tree Pipit.  As we started to wend our way back to the car park as the heat of the day built up a distant raptor came scything through the air towards us. A thrilling high speed Hobby on the look out for dragonflies. By the time we found our way back to the cars we had all agreed it had been a splendid morning in a beautiful part of the Sussex countryside. No Woodlarks but you can’t have it all.

After 2 years of cancellations due to Covid or bad weather we at last managed to take part in John Coit’s long awaited  walk in the South Downs to The Burgh in the amazingly remote (and  sometimes bleak) area just above Amberley Chalk Pits. After being lulled into a false sense of an easy stroll by the early meander through fields and woods near the River Arun we were catapulted upwards by a steep series of 200 steps into a world far removed from  people and villages. Slogging ever skywards with John and I were Louise, Val and Libby M.

The easy stages were full of  birdsong that we were used to at our usual altitude. We were serenaded briefly by a Cuckoo and many of us thrilled to see our first Swallows of the year. Much of the background music was provided by  Blackcaps, Whitethroats and Chiffchaffs accompanied by the ubiquitous Wren, Robin and Blackbird. Song Thrushes were singing and we were given a 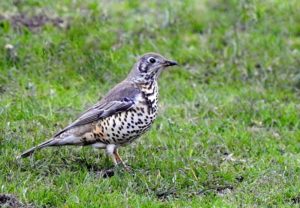 bonus when we found a Mistle Thrush standing pale and upright, a statelier figure than its cousin. By the river Reed Warblers and Cetti’s Warblers competed and Louise found us a Cormorant with it’s arms outstretched! Among the commoner brethren were Linnets, Long Tailed Tits,  Goldcrest, Little Egret and Jay. Just one Lapwing “pee-witted” somewhere but I’m not sure any of us actually saw it. We did all, however, hear and see the Spitfire which John had obviously organised to do a flyover. That was almost the last thing before the merciless ascent of the steps.

Having spluttered are way towards the heavens we were rewarded by being in a seemingly different world. No traffic noise, visible civilisation or people. The realm of the raptors. At least 4 Red Kites wowed us with their flying and

zooming down to ground level for food. Buzzards were magnificent with their soaring and gliding. Ravens live here and gave us a view as did both species of Partridge although Louise and I missed the Grey Partridge. This was for a good reason as were enraptured by singing Skylarks at the time. Herring and Black Headed Gulls were enhanced by a Lesser Black Backed Gull and a large group of Stock Doves were feeding on an arable field. Last bird of the day in the heights was a Pied Wagtail kindly strutting its stuff at Canada Barn. We amassed 51 species in all.

Libby found lots of wild flowers for us and Val was in good Butterfly finding form so we all learned things we didn’t know before which is always an added bonus in life! All in all a wonderful day.

Soon we will be adding reports from our outings and trips. 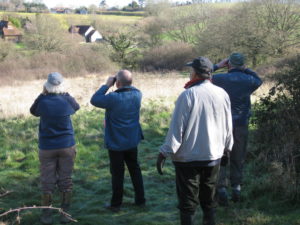 Come back then and find out what you may have missed!

In the meantime have a look at our upcoming events calendar.