Sallie was surprised to watch a Blackbird by her pond helping himself to some tiny tadpoles, while Paula 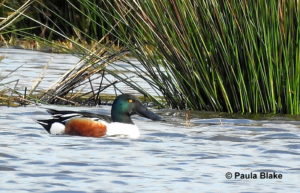 reckons her garden is Dunnock Central – no less than 11 of them on the 27th!  The next day along the Millstream she found a male Linnet, a Yellowhammer, a pair of Reed Buntings, half a dozen Meadow Pipits on a power line, and on the wet area 2 pairs of Shoveler, a pair of Teal, Mallards, 2 Coots and a lone Lapwing taking a rest and standing on one leg.  There was an influx there later that day when Mike came across 12 Shovelers!

Bryan saw a Barn Owl flying near Betley on the 3rd; Peter & Penny had wonderful views of another (down south?) a few days later. Will’s garden pond was visited by a Firecrest on the 4th.  The next day a Blackcap was at Sallie’s. Two male Reed Buntings arrived at my garden feeder on the 6th, but Brian L trumped me by saying he & Karen had at least 6 regularly coming! At Truleigh Ponds on the 5th John & Pauline watched a male Red-crested Pochard on the water. Just outside our boundary but an angler arrived and the duck flew off not only giving a very clear view of its wing markings as it flew into our domain. Quite a skittish bird so could well be truly wild and not on a visit from a London park where John has previously seen them. Darrell counted 8 Buzzards together on the Lydds on the 7th.  Three found a thermal and drifted off north while one was harried by crows and headed east pursued by the mob (it’s beginning to sound like one of those rhymes we used to learn…)   Also, he was fairly convinced he saw a Turtle Dove, but wouldn’t call it as such as it seems far too early in the year and he was without binoculars. Just wishful thinking or an early arrival?