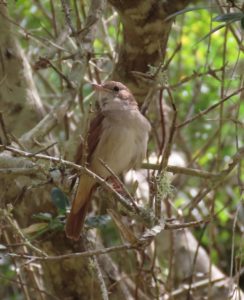 Now that most have stopped singing, I’ve estimated a total of 24 singing males in a patch including Edburton Sands, Oreham Common, Woods Mill, Henfield, Shermanbury, Wineham & Twineham.  This is based on three night visits by Will and myself, other daytime walks by me (and the dog), and reports sent to me by other members of the group.  A lot was against us and the birds in 2019.  Northerly winds kept migrants the other side of the channel in April, and winds continued to be northerly and cool through early May, meaning that it was difficult to schedule the night-time drives to coincide with availability and reasonable weather.  And then there’s holidays!

South (10): The patch that continues to be the very best in the area is around the millstream, the first 500 yards or so west of Woods Mill, where there is a section of wonderful blackthorn hedge, ideal for the species.  Having recently spent a week in Menorca where there were Nightingales virtually everywhere, one wonders why they are so picky over here – but it could be that there are just far more insects etc. generally over there, whereas here they are only found in any abundance in relatively unmanaged areas? There were usually three, sometimes four, singing males heard along here, and another couple further north, which could be heard from the entrance to Gardner & Scardifield and from New Barn Lane. It was extremely disappointing that we heard none on the reserve at Woods Mill, or on Oreham Common – the first year in our 21 years of observations that we have drawn a blank at these two locations.  Though subsequently a report came in of one that arrived on the reserve on 15th or 16th May, and Mike heard it on the 20th.

Three were recorded in the Perching Sands/Catsland Farm area.

North (10):  Next best area is Wineham and Shermanbury.  Two by Shermanbury Place, probably two by Furzefield House and two along the bridleway running west from the new bridge.  A resident of Wagstaff Cottages, who used to report her local bird to me, has now moved, and we heard nothing there on three stops.

Twineham was another disappointment.  We heard three birds on our drives, all in different places, and all only heard on one visit.  Another was east of Twineham Grange in what has become a “traditional” location, but there have been multiples here previously.

Henfield (4-5):  There were a maximum of three along the Downslink, one south of the village and two to the north, and another which took up residence north of Field House (Furners Lane) and was heard by several of us. One was singing for over a week near the alder wood at Woodmancote.

The number of birds which are actually in the revised “Mayfield” area are the two along the Wineham Lane bridleway and one near Morley Farm, but those at Shermanbury could well be affected by change of habitat if the proposal succeeds.

Not a great year, but not our worst – see chart below. 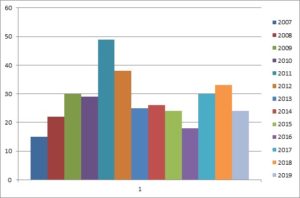