for a pair of Stonechats.  On Henfield Common this morning.  Only the male perched nicely! 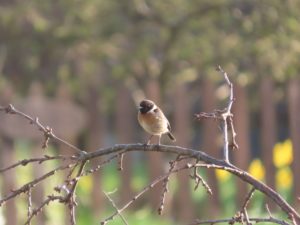 It was a splendid morning on the 6th after all the rain. At the foot of Windmill Lane a Mistle Thrush was singing, before it flew off towards South View Terrace. Along the railway line a Goldcrest rendered its lovely little song. On the brooks what has become the “usual” flocks of Teal, Wigeon, Pintail and Shoveler, and I spied a couple of Gadwall and a reasonable number of Lapwing. While watching these there was a distant strange but familiar noise coming from the west, the brain was confused but then realisation dawned – a drumming Snipe! There were 2 displaying Buzzards overhead, Grey Herons at their nest, by the millstream a Cetti’s Warbler burst into song, while two Skylarks rose from the grass, one singing beautifully. Meadow Pipit, Yellowhammer and Reed Bunting also seen along that stretch, and the call of a displaying Lapwing.

On the Area walk on Monday 9th, we added 7 Tufted Ducks (shows the water is DEEP), and 11 Egyptian Geese, and heard Chiffchaffs and Goldcrests in song. 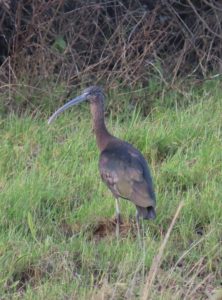 Though the inefficiency of the scribe made us think we were falling short!

The Fab Four, Nigel, Nige, Will & Val (plus Maya the collie,) met at 7.45 at the Downslink car park to the serenading of a Song Thrush, and headed off by car for Woods Mill, leaving the dog in the car there for a while.  At Woods Mill and Sands Farm we managed to tick off most of the more common species, plus the only Mistle Thrush of the day, which was singing beautifully, a group of 5 Bullfinches, a rather large flock of Stock Doves (c40) in one field at the farm.

After a quick tea/coffee break  we unloaded Maya and set off on our long trek.  Weather still a bit gloomy at this stage, then the wind got up  as we walked along the millstream, though we found Snipe, Skylark and Meadow Pipit along there. We joined the Downslink and headed south to Stretham. Will rested his knees for a while at the bridge and the others nipped down river for a Stonechat. A call from Will heralded a Grey Wagtail which was still sitting near the bridge as we returned; then a Raven flew low over the river.  Always worth going up to the overflow pit, and so it proved as a Green Sandpiper nipped up to show off its white rump!  Back to Stretham, the Downslink, and a squelch into the fields for a view of the ducks, not huge numbers but we got Shoveler, Teal, Wigeon, Pintail and Gadwall. There must have been 600 or more Lapwing a bit further west.  Sky was a gorgeous blue now, but it was still rather breezy.   Ticked off House Sparrow at South View Terrace and Greenfinches in my garden.  A Coal Tit was seen by Nigel & Will, but not by Nige, and Val was in the kitchen making tea at the time – it didn’t reappear, so didn’t count, as the rules say 3 out of the 4 must see the bird.

We hadn’t seen or heard a Buzzard all morning, which was rather worrying, but started off though the village and back to the Downslink. Wind easing by now and the sky still clear.   Just as we were about to head north, noisy gulls turned out to be mobbing a Red Kite, which was a nice bonus.  A lovely flock of Fieldfares (c30) and Redwings (c70) were feeding on the saturated ground south-east of Betley Bridge. Not until we got well on the way to Partridge Green did we finally get that Buzzard as one flew across by the wet area on the east side.  Dusk was beginning to fall as we wandered back along the river.  AKestrel was hovering, and a Barn Owl obligingly put in a brief appearance for us near Great Betley.  That was probably it we thought as we took the fishermen’s path to Stonepit Lane, but then a Tawny Owl hooted loudly from near the river.  We were slightly deflated as my log book only showed 59 species, and there were moves afoot to bribe the recorder to allow the Coal Tit!  However, a tot up of the species later in the evening, revealed that Jackdaws and Carrion Crows we had seen right at the start weren’t included so the final total was 61.  Definitely one of our better efforts, and without managing Yellowhammer, Goldcrest or – would you credit it – Pheasant!

Photos of Grey Wagtail, assorted ducks in the lovely blue water, and the evening walk back along the river.

When adding together all the species we have seen on our Races,  it comes to 86, quite remarkable really! 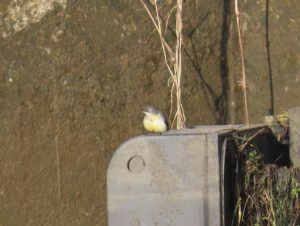 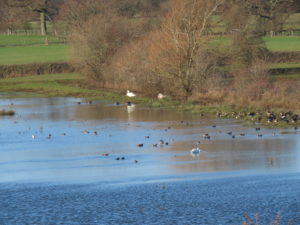 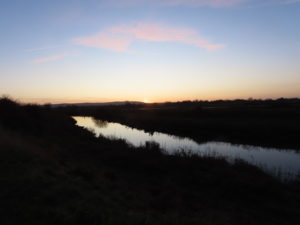 There was a Glossy Ibis, trying to pass itself off as a Lapwing on the brooks on 6th Jan – but its all dark colour, long neck and down-curved bill gave it away!  Also 3 Black-tailed Godwits, lots of Lapwing, Shoveler, Wigeon etc.

We have reached the end of our year of concentrated garden birdwatching.  The final week  finishes on Saturday 28th December.  You may now be breathing a sigh of relief, or maybe one of disappointment!  Thank you so much for being a part of it – even if you haven’t managed to keep watch every week!

I’m not really up to speed with the data recording system, but it does look as though you can continue to record your sightings during 2020 if you would like to carry on, and we will still be able to pick up from the website what you may see in your gardens in the future.

In the New Year we will start to look at the totals of the different species recorded, compare with past surveys we have done, and with national statistics too, to see how things have been changing in the last 20 years.

I’m not sure that many villages will have quite so many records of peacocks as we seem to have! 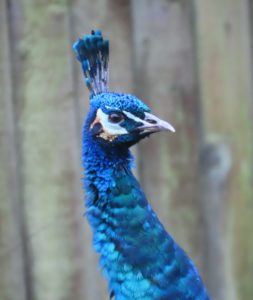 We do hope that you have enjoyed watching your garden birds, and will continue do so in 2020.

On 28th November a Cattle Egret was on the southern brooks – first since 1999/2000.  Then on 5th December Mike found a Water Pipit in the same area, the first ever for Henfield Birdwatch! 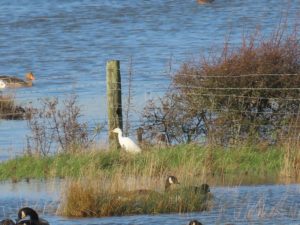 Wed 6th (from Val): The usual good numbers of geese and gulls on the brooks, with about 50 Lapwing and two larger grey waders with heads tucked into their backs.  Wondered what they were when one raised its head and flapped its wings – Black-tailed Godwits.

Sat  9th (from Peter & Penny): The flood water is back around Rye Farm and lots of birds have moved in – 100+ Canada Geese, large flock of Fieldfares, family of Swans, Mallards, Wigeon, Heron, loads of gulls and  2 or 3 pairs of Tufted Duck (first ones recorded this year).  A pair of Stonechats in the reeds by the barn conversion at this end of the track

Sun 10th (from Paul): Around Betley were good numbers of  geese and Wigeon, plus a pair of Shoveler. In the field behind Bishop Park were approx. 250 Black-headed Gulls with a lone Common Gull. Despite much scanning with fingers crossed there wasn’t a single Med Gull in with them!

Paul found 2 on the Bishop Park estate on Sunday, which Paula managed to photograph against a remarkable blue sky, and on Nige’s area walk on Tuesday 5th another was just to the north of Park Farm – sitting on a fence with a Stonechat and 4 Meadow Pipits. 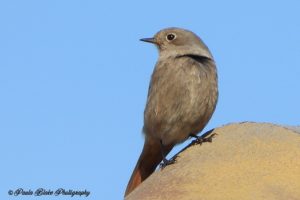 Paul took his usual route on the 27th, heading up to Betley bridge and then back down the river. A mini-flock of three Mistle Thrushes were moving around the east end of Stonepit Lane, a Kingfisher shot under the bridge at Betley and there were 50ish Wigeon and a pair of Gadwall on the floods west of the river alongside the Mallards and Greylags. Also seen on the way back along Stonepit Lane were three Goldcrests, a Nuthatch and a Coal Tit. Arriving back at Bishop Park he noticed a small dusky bird flitting around the posts that line the road on the central footpath area. All of a sudden its quivering red tail became clear….  a Black Redstart! It flew off north and despite keeping an eye out all day it appeared to have quickly moved on. A great end to a lovely walk in (at last) some decent weather.