The end of May saw Henfield Birdwatch run another Big Bird Bash, in aid of The Haven, consisting of a series of walks throughout the parish to see how many different species of birds can be found in one weekend – albeit one which just spilled over into June!  To maximize the chances of seeing as many as possible, one of the walks started at 6.30 am, and others didn’t leave until 6.30 in the evening. 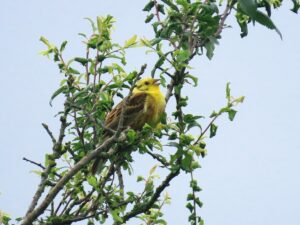 The early walk, led by Paul, started at the Downslink car park, and headed north. Fortunately not too many speeding bikes and noisy dogs around at that time of the morning, and the group was treated to some wonderful experiences.  Two Nightingales were singing and flying around in the scrub bordering the track – maybe ones that established territory there last year, or possibly their offspring?  By Betley Bridge a male Yellowhammer was singing that “littlebitofbreadandnocheeeese” song in a nearby bush, and a female was seen diving into another bush with nesting material, or possibly food, in her beak. 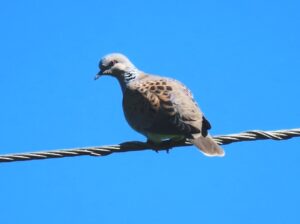 The 30 or so folk who joined Mike’s evening walks not only enjoyed the wonderful songs of up to five different Nightingales and caught a glimpse of the Kestrel family in their Woods Mill nest box, but also saw and heard a Turtle Dove, and spotted some Lapwing chicks – these are yet more species on the Red List, due to an alarming decline in numbers in recent years.  Mike’s walks proved so popular he ended up running two more! 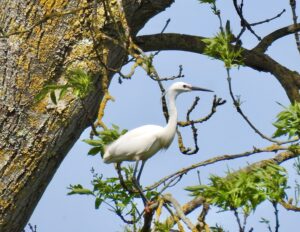 The final walk took in the area along the Downslink and the river to the south of the village.  Grey Heron youngsters were still hanging around the couple of nests which had been occupied this year, and several Little Egrets were noticed, including one perched in a tree, showing off its main distinguishing feature – yellow feet! (Photo by Graham Speed) 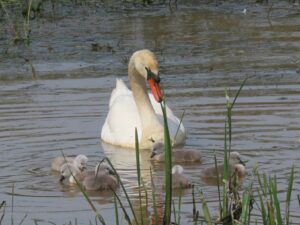 A pair of Mute Swans which were seen building a nest a couple of months ago, were proudly showing off their family of 6 cygnets.  And some more Red-list birds put in an appearance, with several Skylarks heard singing, and chattering Linnets flying around by the river.

All in all an extremely successful Bash with lots of people joining the walks and recording birds in their gardens.  Number of species seen was a superb 69.  We asked for donations – which stood at £493 at the time of writing – all of which will go to our wonderful Henfield Haven.