It was stretching it a bit to make Tuesday the final walk for the Big Bird Bash Weekend, but it proved very enjoyable for myself & Maya, who were joined by Nige, Sue M, Angela T, Lucy and Mary F.

The highlights of Area 9, part 1, from the village to Stretham this morning were a nicely perched Kestrel, 5 Stonechats, about 300 Starlings chattering away in a tree, a young Grey Heron sitting on the old nest with four or five Cormorants in the cormorant tree nearby and the seal coming up with the tide at the bridge.  We turned up river (part 2) when Sue spotted a flash of orange and blue, then lost it, then found it again sitting on a concrete slab near some railings.  We watched it for a long time, it dived into the river and came back to the same spot.  We left it sitting there, then Sue noticed it again flying up river with a fish in its beak.  The overflow pit had a lot of birds flitting about in the reeds, more Stonechats (we reckoned 25-ish total for the morning), Reed Buntings, and at least one Whinchat. A Sparrowhawk dashed across and a yellowish-but-dark-legged Chiffchaff was seen flitting about in willows by the river, so we couldn’t turn it into anything else.

Didn’t get back to the starting point until about 1.30.

We saw 45 species  which didn’t include Long-tailed Tit or House Sparrow! 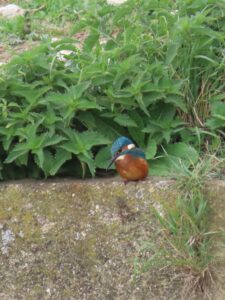