A good call to postpone the walk. The mist was clinging rather poetically to a spider’s web suspended between outer twigs of a tree. About 20 Swallows were flying over the fields, in some hawthorn bushes Angela & I saw at least 4 male Blackcaps, a brief view of what I’m pretty sure was a Garden Warbler, and then a Lesser Whitethroat showed nicely for several minutes on a low branch – affording a “record” shot. 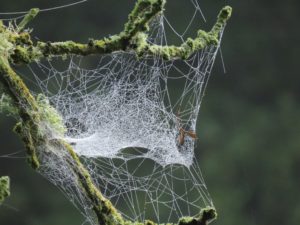 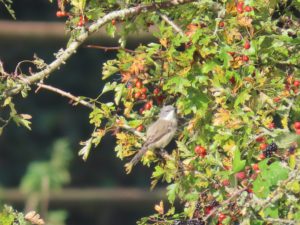 As we headed up river from Stretham, Meadow Pipits were pipitting around and we saw a female Reed Bunting. A lone heron was by the overflow pit, the family of Mute Swans only had 2 young with them this month, we saw 2 Teal, and heard Coot & Moorhen. A bit further along there were Chiffchaffs, Whitethroats and a sunbathing Wren in some cut, dead branches lying on the grass, and another flock of hirundines passed over – this time a mixture of Swallows and House Martins.

Final sightings were 2 Buzzards flying across the Rye Farm track and then a flash of orange alerted us to a Clouded Yellow butterfly feeding on thistles and buddleia.