Angela T and myself headed over to Heyshott Common on the evening of 28th June.

We walked round the Common we heard a Linnet singing, plenty of Song Thrushes and a persistent Yellowhammer.   A Green Woodpecker called, then we found it sitting on a small tree.  In a boggy patch we found some cottongrass and bog asphodel, 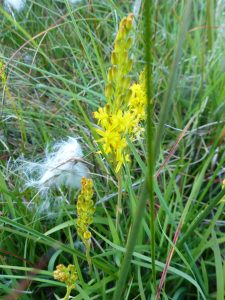 and also found some white cross-leaved heath among the more usual pink.  We stopped where there was a clearing, and noticed a juvenile Stonechat close by doing a bit of “flycatching” for a considerable time in the fading light. The evening glow also illuminated a lovely roe deer stag not far away.

After some brief tuning-up  about 9.20,  churring started in earnest at 9.40, with a very vocal male in the pine trees to the west.  A female flew low across the clearing under the wires, and the male patrolled around, churring and wing clapping, at one stage churring in a tree only a few metres away. Had one excellent view of the male flying across the clearing, again pretty close, wing patches clearly visible, another couple of views of a/the female as well as several fleeting glimpses of the male as it moved from one stopping point to another.