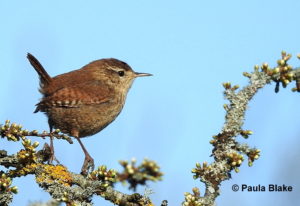 At the overflow pit Nige, Libby & I were annoyed to find two people training dogs to retrieve game from the water by throwing in objects – that is until a Mute Swan hauled itself up from the nearby stream and flapped aggressively towards the dogs.  Dogs & people beat a retreat and we gave the swan a round of applause! Further afield Graham & Liz visited Dungeness (51 species) and Rye (60 species), while Yvonne nipped down to Hove and found Waxwings! Sallie went to Burton Mill Pond and saw a probable Marsh Tit collecting bits of lichen. On the 26th Graham & Liz had their 2nd ever garden visit (in 28 years) from a Treecreeper.  At Woods Mill on the 28th Paula got a telling off from a pair of Wrens, but it gave her a chance for a photo.  The same day a pair of Coal Tits was in Lesley A’s garden in Benson Road.